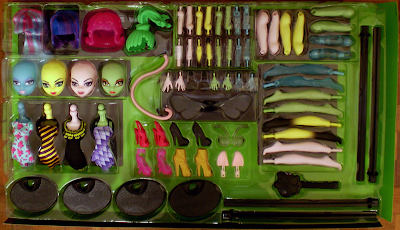 A brief deviation from Ever After High to the franchise that started it all.  As the Monster High Create-A-Monster Skultimate Set is only available in Australia so far, here’s a review so the rest of the world can know exactly what it is or isn’t missing.  There’s nothing new in the set per se, but it has been drawn from a vast net of CAM parts.  The logical way to break them up is as follows:

This last concoction is what the spirit of Create-A-Monster is all about - adding a creative ‘building’ aspect to the Monster High line.  Being able to create four fully-dressed, standing figures is a nice touch - one of the main drawbacks of the CAM line is the general lack of completeness to the sets.  If you wanted all these specific pieces, you’d need to buy four starter sets, two add-on packs, one mail-order torso set and some paint stripper.  At $58 Australian, I feel the 84-part set is worth the price.  If you don’t already collect CAMs you get four dolls at less than $15 each.  If you do have a CAM collection there’s a good chance you’re short on torsos, thighs, upper arms and stands, and this set has a bundle of them to help complete, mix and match your bags of spare monster limbs.

Mad thought: the preantepenult is the fourth-last syllable of a word.